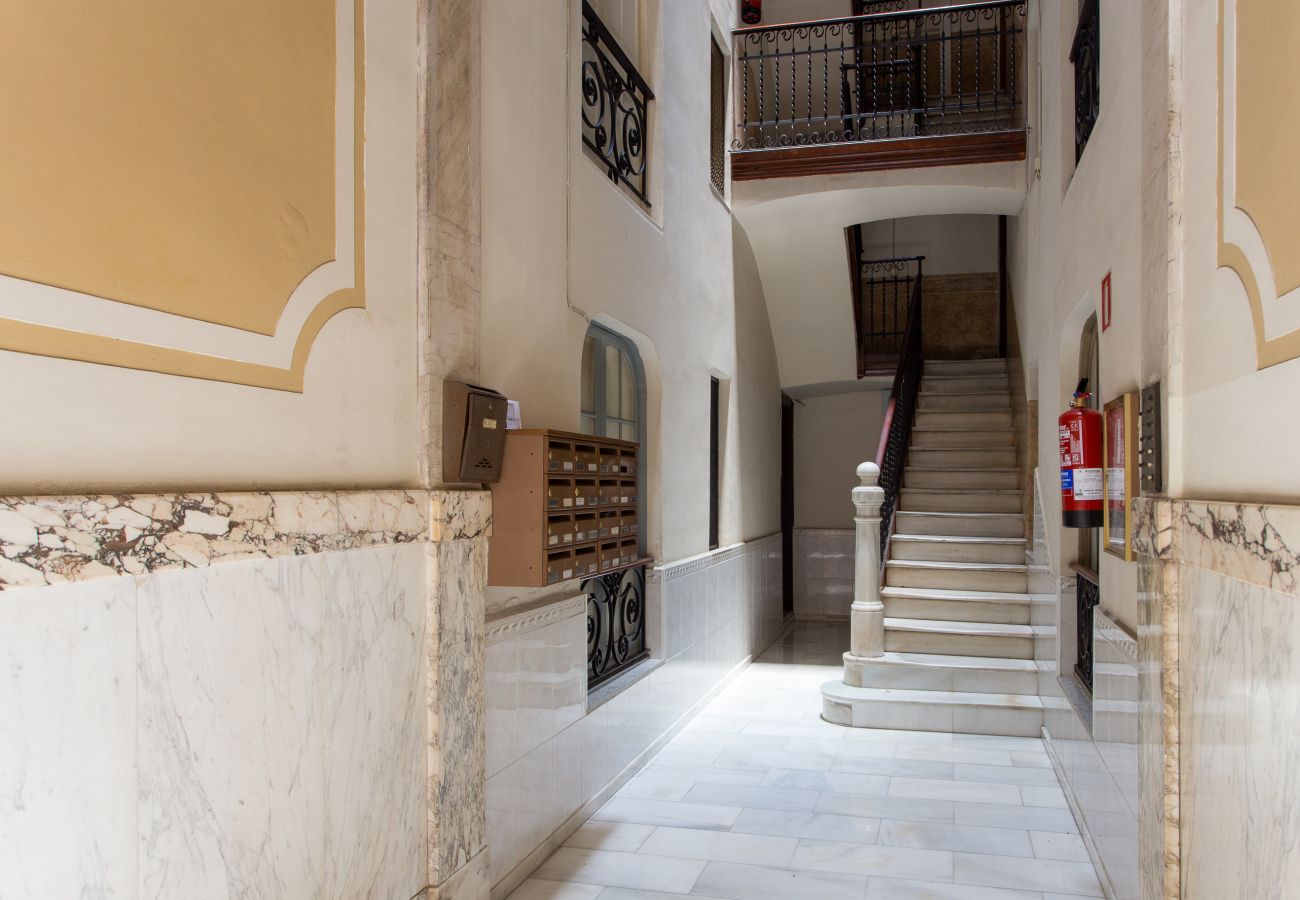 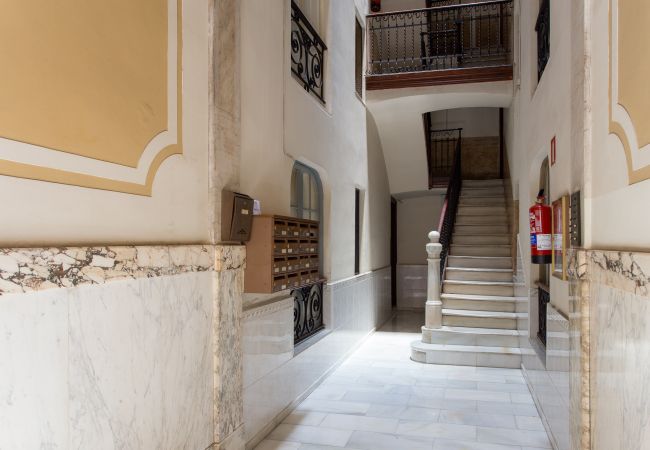 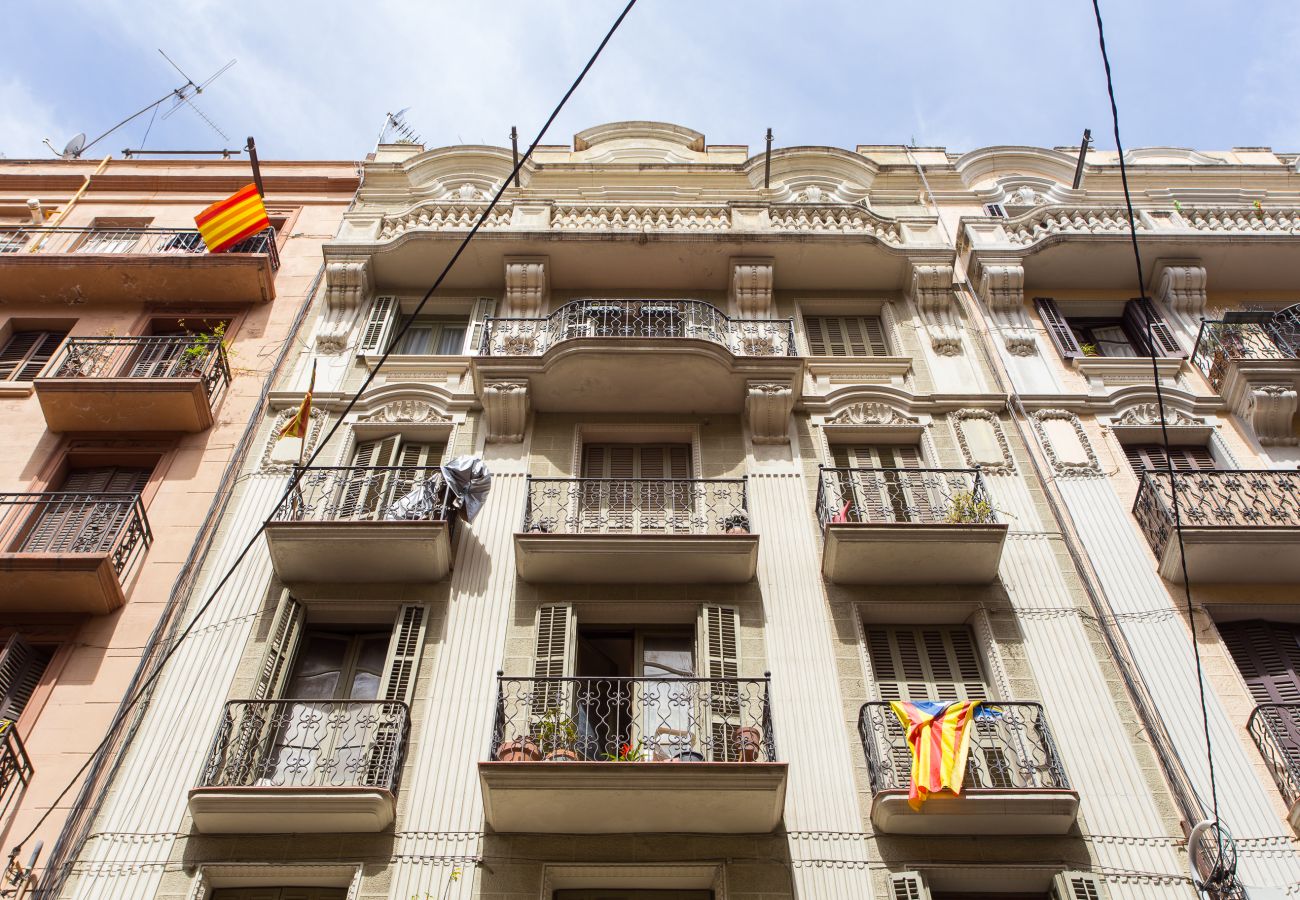 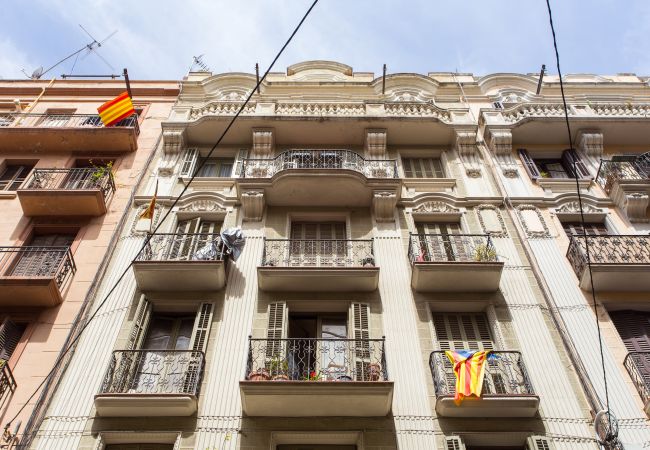 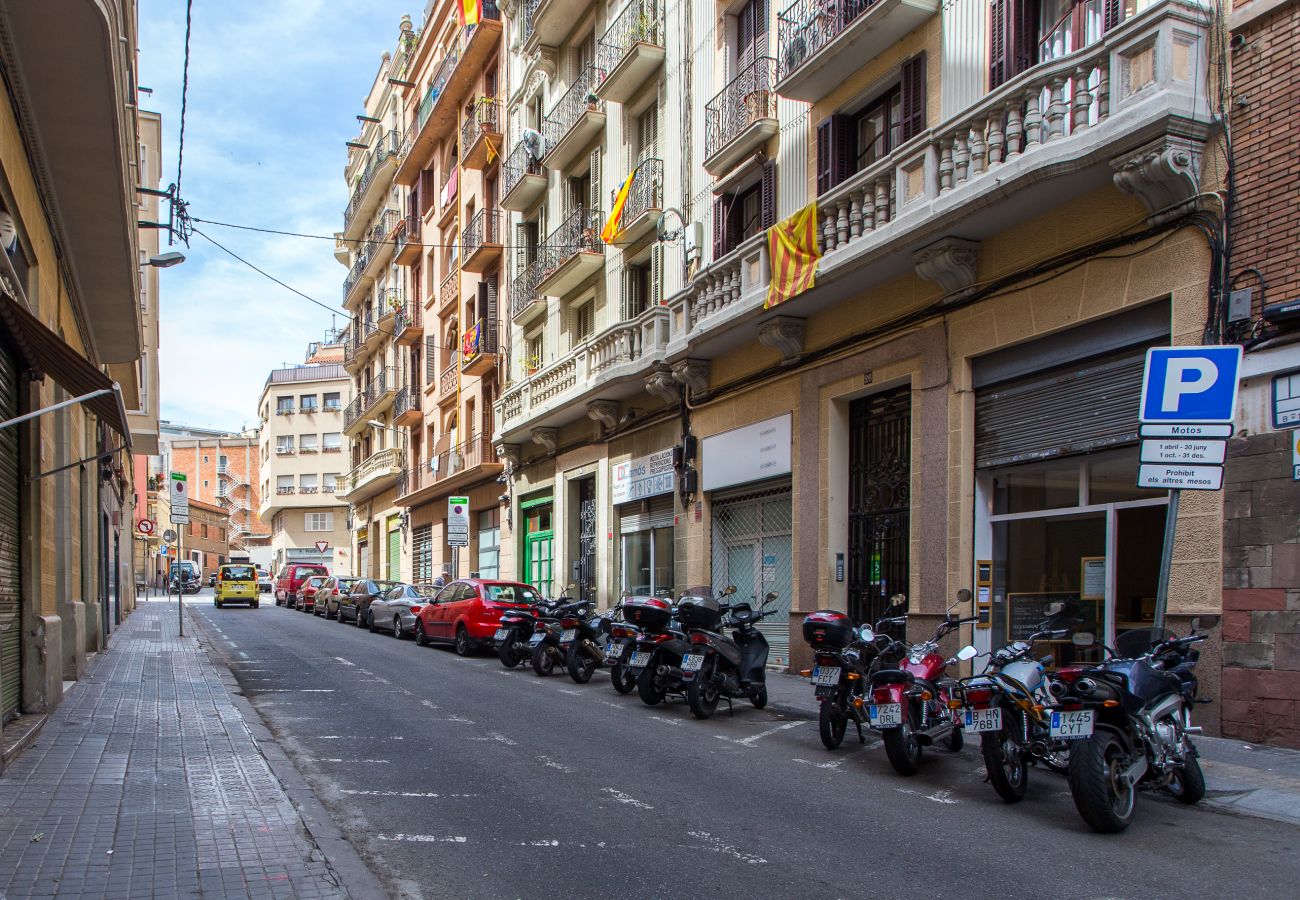 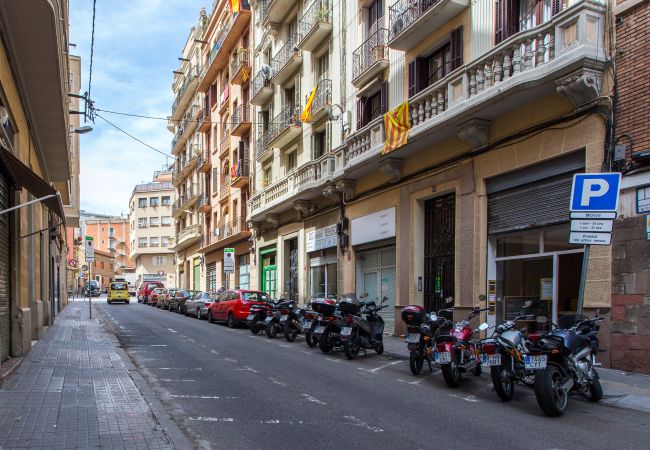 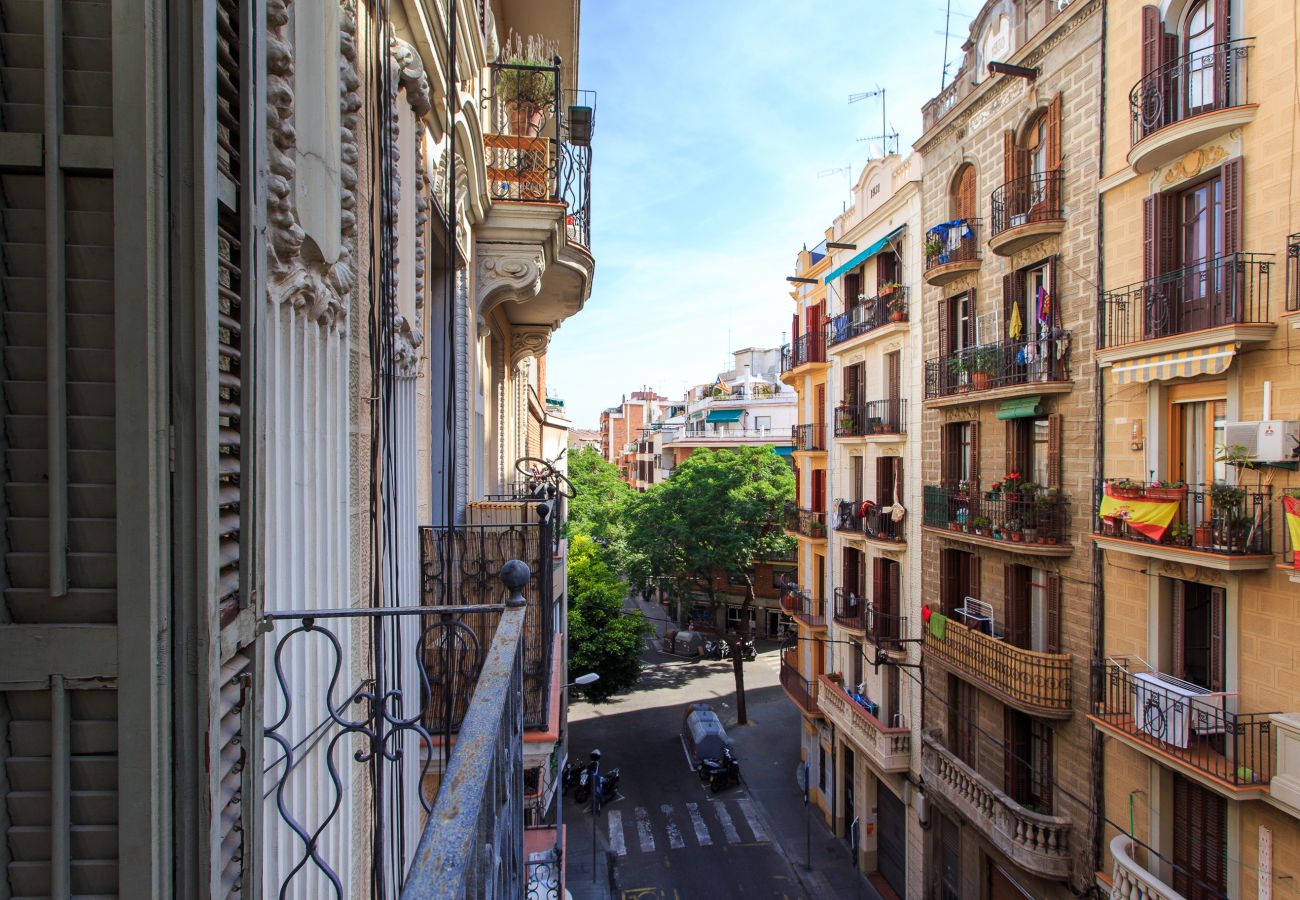 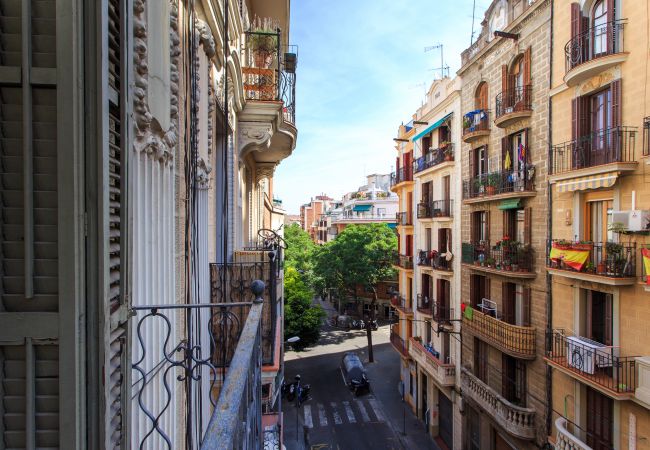 This lovely 60m2 apartment can house up to 5 people, with 3 bedrooms.
1 single room and 2 large double room (with balcony or window). In the centre of the property you will find a sun bathed living room perfect for enjoying breakfast with family or relaxing after a day of exploring the city. The kitchen is fully equipped with everything you may need including a fridge/freezer, toaster, microwave, coffee machine, boiler, washing machine, ...
Moreover, for a maximum comfort, apartment offers A/C machine (hot and cold), Iron, Hair dryer, TV, Internet Wi-fi, directly in the apartment.
Getting around the city couldn´t be easier ! You will enjoy the central situation of this apartment through various taxis or metro stations located in the vicinity of the apartment allowing easy access to all the best sights in the Barcelona.
You will be just 100 meters to it and the subway station.

Montjuic / Poble Sec:
In the mountains are various Olympic venues that hosted the 1992 Summer Olympics.
It is internationally known for having served as a reference for estimating the first definition of the meter: the commissioners at the request of the National Constituent Assembly, Jean Baptiste Joseph Delambre and Pierre Méchain measured the arc length of the meridian passing through France, of Dunkirk to Barcelona Montjuich, between 1792 and 1798; the measurement results served to establish the metric system.
In Montjuic are also tourist attractions such as the Spanish Village, a venue built for the 1929 exhibition , displaying streets, squares and characteristic locations throughout Spain, as can be seen at its entrance with the Torres de Avila, or a typical Andalusian courtyard, with its streets full of flowers, as well as being populated with restaurants, bars and entertainment venues.
.
Montjuic mountain contains numerous gardens, most gestated during the twentieth century.
A final push to gardening in the area came with the celebration of the Olympic Games 1992 in the Mirador del Migdia opened and a new botanical garden of 14 hectares dedicated to the most beautiful plants found in the Mediterranean climate as well as plants from all around the world, created by Figueras. Shortly after also he opened the Mirador del Poble Sec and Sculpture Garden annex to the Miró Foundation, with works by sculptors like Tom Carr, Pep Duran, Perejaume, Enric Pladevall, Jaume Plensa, Josep Maria Riera i Aragó, Erna Verlinden and Sergi Aguilar.

Plaza of Spain Barcelona is one of the most emblematic areas of the Catalan capital. It was built during the International Exhibition of 1929, according to a draft drawn up by Josep Puig i Cadafalch and Guillem Busquets and completed by Antoni Darder. With 34000 square meters is the second largest square in Spain, after the Plaza of Spain in Madrid, and ahead of the Plaza de Catalunya in Barcelona.

important buildings in the square include the Centro Comercial, Las Arenas (old bullring) and the Plaza Hotel and the Venetian Towers, designed by Ramón Reventós, built for the 1929 Exhibition calls.

Check-out:
Late check-out (until 5pm) may be requested, upon apartment availability and with an additional cost of €50.
City Tax of Barcelona:
We would like to inform you that since 1/04/2017 the municipality tax of Barcelona is 2.48€ per person (> 17 years old) per night, which will be charged upon arrival.

+++ Our place is just for relaxing holidays. +++
It is really very important to respect the rest of the neighbors and take care of all the equipment and furniture.
In case of complaints from neighbors due to any noise (from 10pm to 10am) or rude behavior on the part of the Renter (or any person in the group), the tenant will lose the security deposit. The second complaint from a neighbor or any police visit due to a noise problem would break this contract immediately. The Tenant would have to leave the apartment immediately without any financial compensation.
For any key lost during your stay, the tenant must pay EUR 50.

Cancellation policies: The conditions of cancellation and payment in advance can vary. Introduce the dates of your stay and consult the conditions.
Additional notes: